What do we do?

Well, we take on almost anything to do with art direction, design, construction, model making, set building and special effects. These disciplines are employed in commercials, fashion, exhibition, films, stills, TV, pop promos, idents, live shows and events. Trade ads in the film industry say we ‘specialise in art direction, model making, set building, rigs and special effects’. On set we are often referred to as an ‘Art Department’, although this is just the tip of the iceberg. Most of our work is usually complete before we get to any location. All the design work, styling, pre-building and model making is done in advance.  Hence, if we have a week in a film studio, it’s likely we’ve had three weeks prep with a sizeable crew. That’s why we call ourselves an Art Direction Studio as the bulk of our work takes place outside the confines of any shoot. 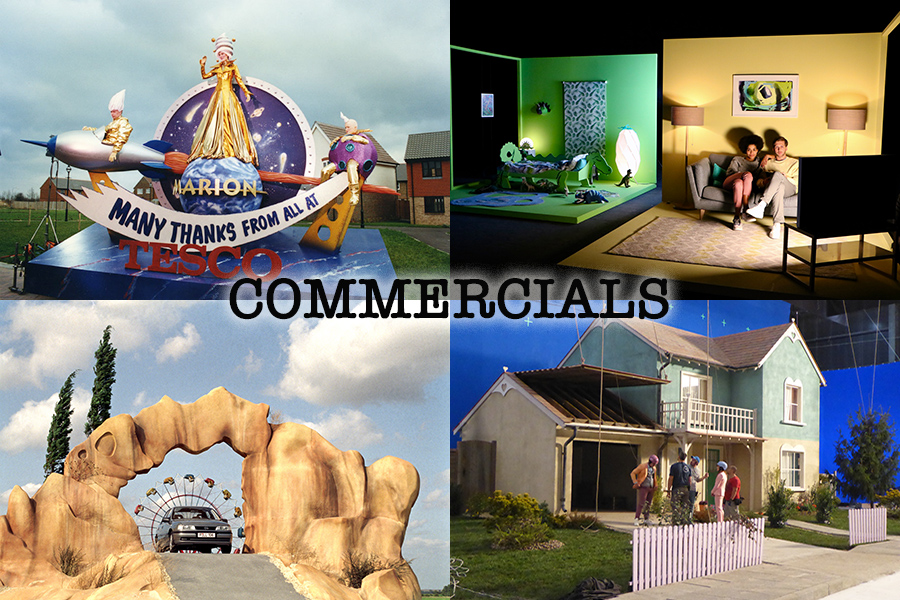 On this site you can see over 30 years of work represented across a diverse range of clients, media and production facilities. Virtually no job is too big, or too small for us. On the large side we have designed and produced full size street sets with realistic interiors. On the small side we have designed and produced intricate sculpted jewellery best viewed through a magnifying glass. And in terms of scale, we have undertaken just about everything in between. No two jobs are ever the same either. One day we might work in feathers and leather, the next in steel and timber. Above all, diversity is what keeps us both fresh and motivated. Every job produces exciting new challenges and we revel in the fact we never know what’s around the corner. 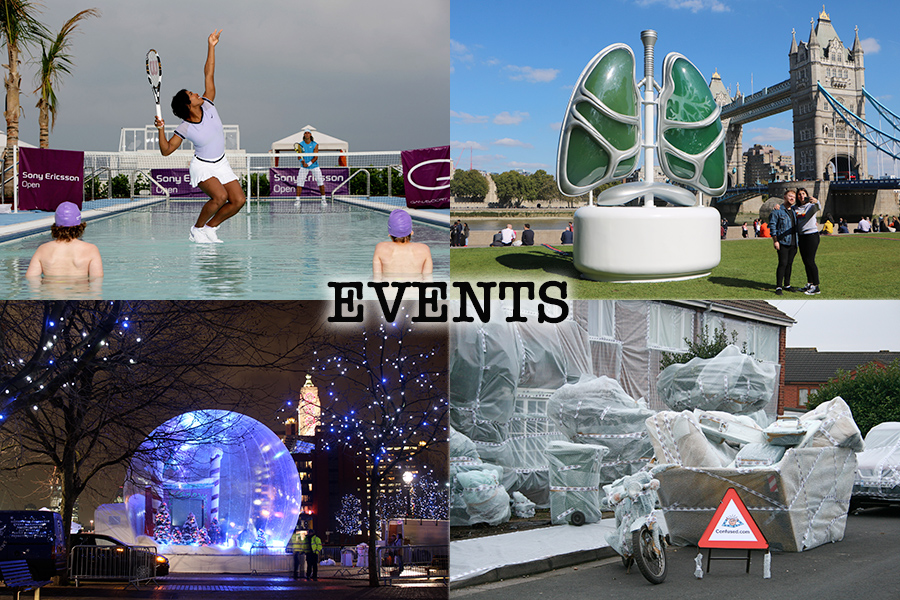 At Einstein’s Octopus we’ve always placed a great influence on the combined package of designing and making. This gives us greater control whilst providing the client value for money. Art directors working independently don’t always appreciate what bringing their vision to fruition can cost. This potentially sells the client a vision they can’t afford. At Einstein’s Octopus we regularly design to an agreed budget, only submitting financially achievable ideas. After finishing the drawings, our art directors become an integral part of the construction process. And once we have an agreed budget with a client we will never add any additional fees unless there is an arrangement to do so. Our Art Direction Studio in East London offers an art direction process that is hands on in three dimensions! 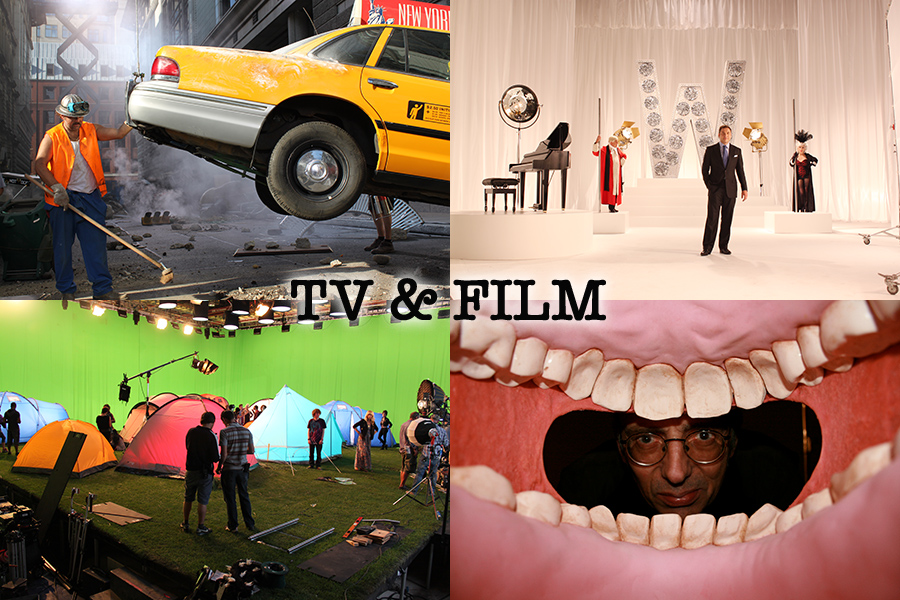 With over 500 jobs under our belt since 1987, our client list reads like a creative who’s who. We are a one stop Art Direction Studio and have worked on commercials for BMW, Tescos, Sony and BT. In the world of music we have made promos for U2, Pink Floyd, Elton John, Bjork and Massive Attack. In fashion we’ve enjoyed a long relationship with Prada and in TV we have worked with pretty much every major broadcaster. Events have been fruitful for us with commissions from the likes of Nintendo, Sainsbury’s and Virgin. Whilst in exhibitions we have worked with The Dome, Newport Street Gallery and The Welcome Trust. A fairly comprehensive list of clients can be seen here. 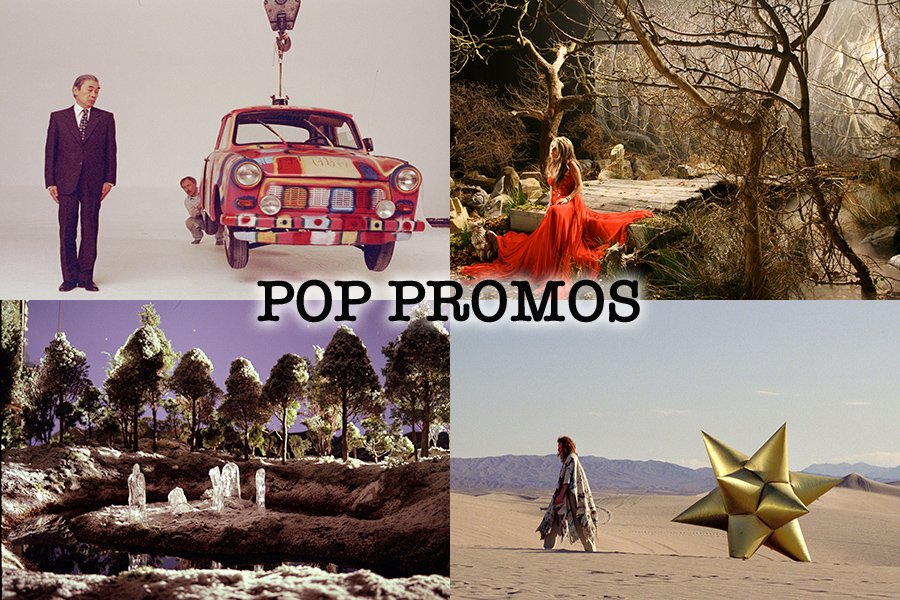 As we’ve been around for quite some time we’ve witnessed many changes, both internally and within the industry. Tony Pletts founded Einstein’s Octopus in 1987 during his mid 20’s and is managing director to this day. When we started a mobile phone was out of the question and answerphones cost over a month’s rent. In addition, a fax machine set you back an eye watering £1500 (we bought an early model on HP). Initially, we specialised in model making for photography, our first job being a lovely commission for Dulux. We had a little Hoxton based workshop in a converted hospital. This was years before the first wave of hipsters moved in with their cappuccinos. Tony had previously worked in Australia and in 1988 he was joined by his former employer and great friend Ian Bracegirdle from Mother’s Art, then the largest Art Direction Studio in the southern hemisphere. 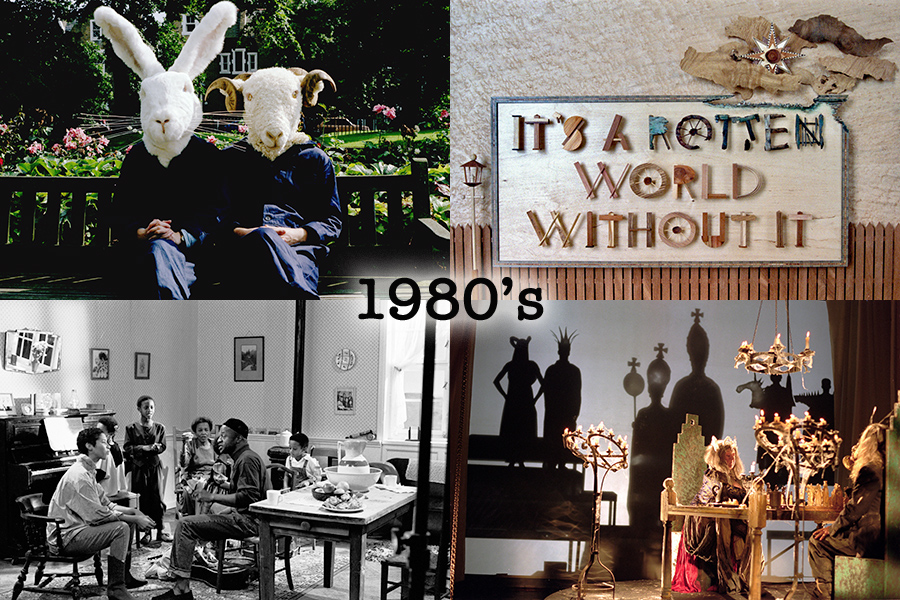 Working with Ian’s considerable expertise, Einstein’s expanded into a sizeable railway arch in Shadwell. Soon after that we took on a separate Art Direction Studio space in neighbouring Wapping. As a result, we graduated into working on pop promos, a discipline that continued throughout the 90’s. Our main production company clients in this area were M-Ocean, SBP and Kevin Godley’s Medialab (all no more). During this time we were lucky enough to work with many artists at the top of their game. In 1991 we started working with the celebrated photographer Brian Griffin. After a few stills jobs Brian took us with him into the then creative and lucrative market of commercials. Some of our best work together is on this Einstein’s Octopus 1990’s showreel. In other words, this is the decade in which we really found our groove. 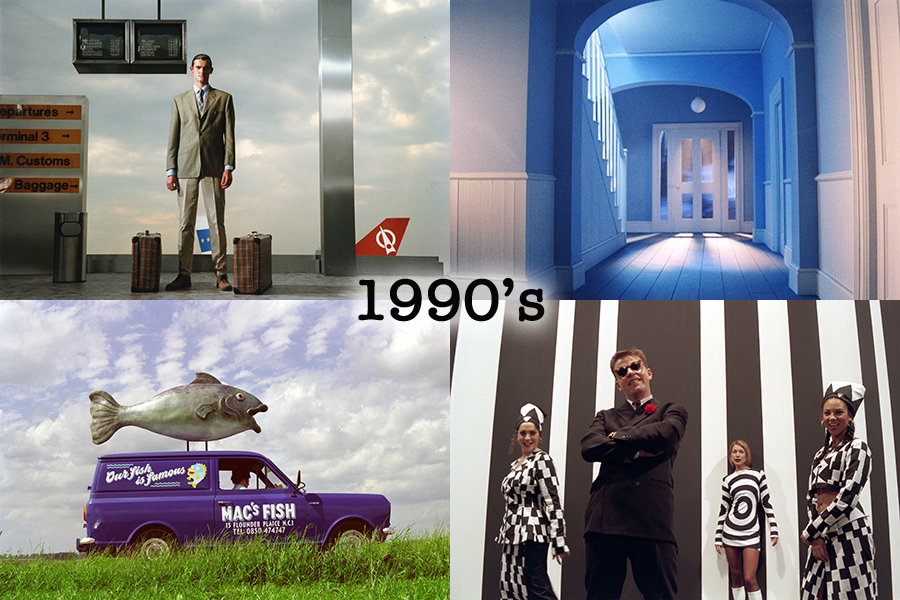 The late 90’s saw us winning ever larger commissions. However, our cumbersome infrastructure meant we regularly struggled to break even. Consequently, a change in staff saw us move to Hackney in East London in 1999 and take on leaner working practices. Serving us well, these practices have ensured our long term survival and allowed us to flourish. Firstly, art directors Glyn Owen and Edd West took the creative helm, followed by construction manager Philip Shaw. Secondly, rather than having full time employees, we built highly skilled bespoke crews for every job. Thirdly, as the millennium turned, we gravitated away from pop promos. In their place Prada launched us into the world of fashion, Sky opened the doors of television and innovative events companies like Cake, Mission and Exposure provided a whole new revenue stream. In short, it was a golden era, as these 2004 and 20o9 showreels illustrate. 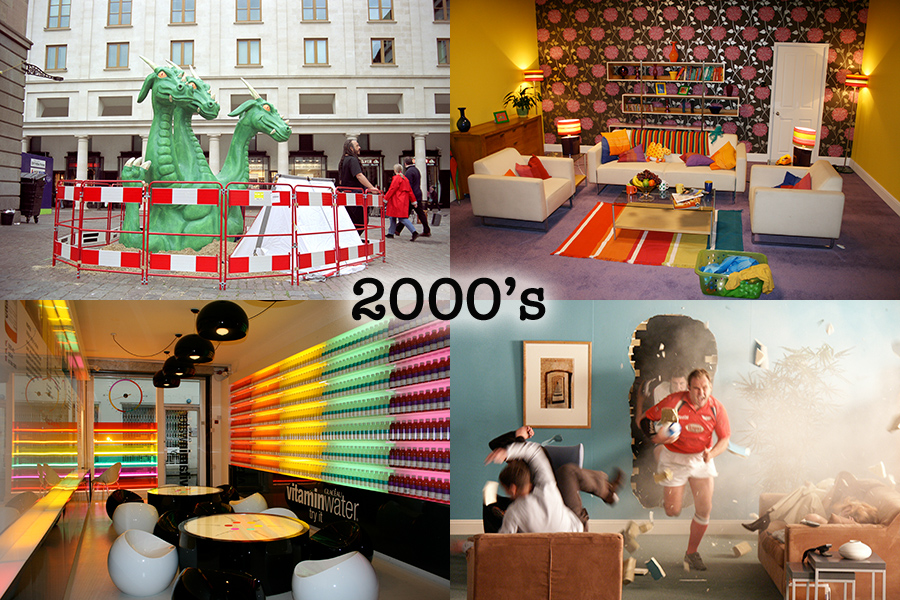 Consolidating in the 2010’s

The global financial crisis, combined with commercials shooting increasingly offshore, made for a tricky start to the 2010’s. However, our lean financial model came into its own, allowing us to navigate any bumps in the road. In 2010 we started a productive relationship with The Chemical Brothers and RSA Films. By the middle of the decade, for the first time, work flowed evenly from all our disciplines. Then, in 2017, we received our largest ever commission from Damien Hirst. As a result, we ended up cutting giant sculpted holes through Newport Street Gallery’s brick walls for artist Dan Colen. Finally, as 2020 came into view and we finished our fifth showreel, it felt like we were on a sustained roll. Consequently, I predicted plain sailing for the months ahead, just as the first reports were emerging of a mysterious virus in China… 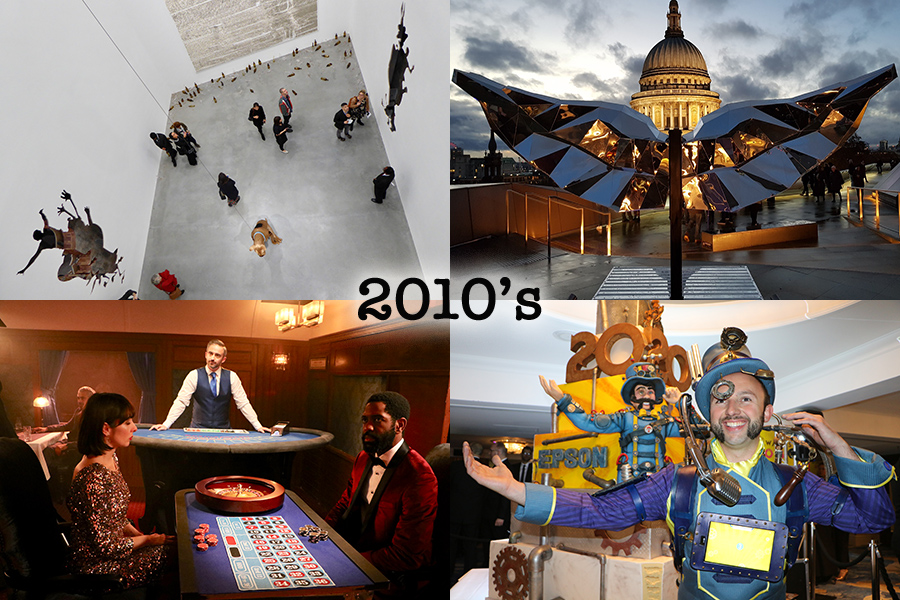 With all this behind us we are still, very much, looking forward. Having years of experience we understand the importance of a deadline. We still handle jobs from concept to completion, co-ordinating all art department activities from storyboarding to sweeping up.  Discussing proposed productions and providing quotes at short notice is never a problem. So if something’s on your mind, don’t hesitate to give us a call. 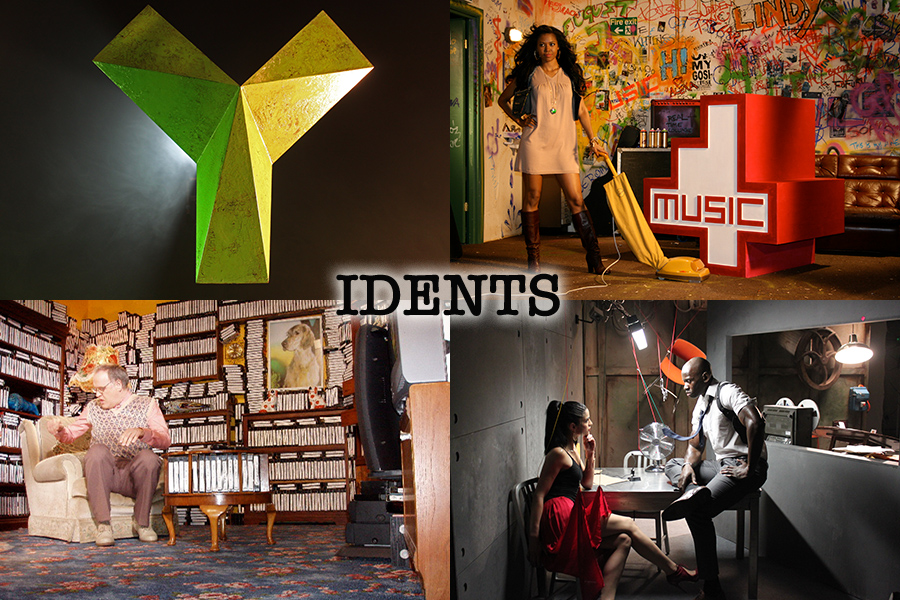 And finally, why the name?

Quite simply, we wanted something memorable that implied intelligence and diversity. In 1981 Elvis Costello was asked in a TV interview by Russell Harty; “why Elvis Costello?”
His response was simple. “For that reason – because you’ll remember it.”
Subsequently, in 1994 we got to art direct Elvis’s promo for Sulky Girl where he casually enquired; “Why Einstein’s Octopus?”
Answering with a big smile, it felt like we’d really grown into our name… 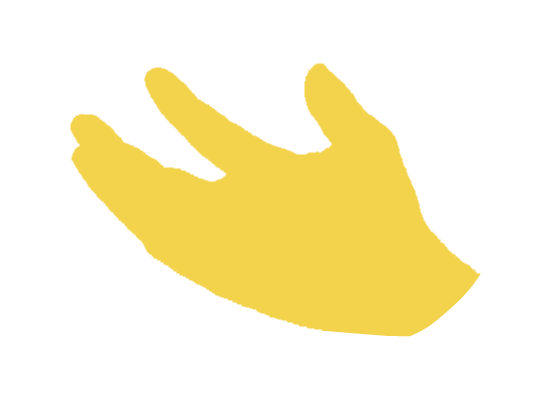